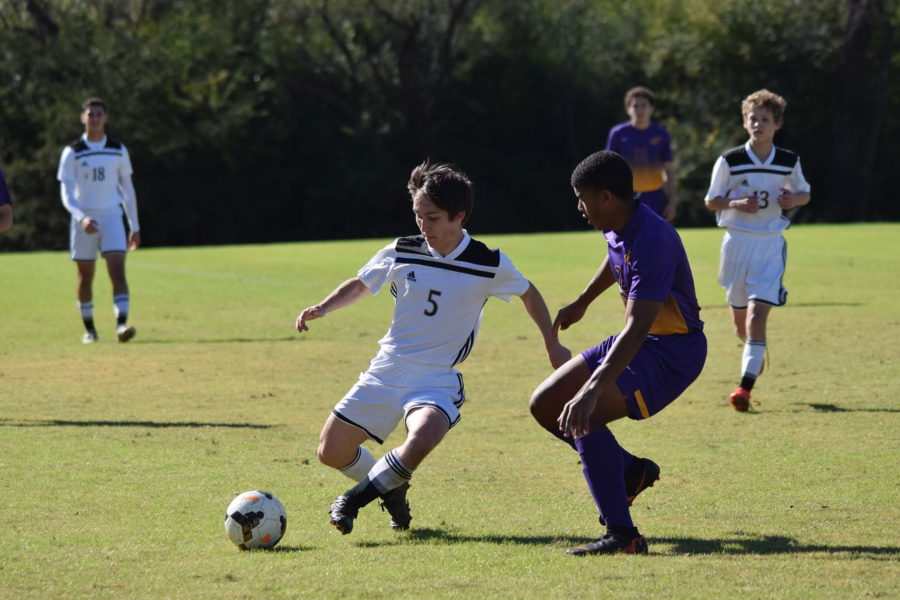 On Thursday November 15th, Cistercian’s Varsity Soccer team made the trip out to Forth Worth to play All Saints for Cistercian’s first game of the season. With many returning players still recovering from a physically-taxing football season, Coach Walsh gave the younger players a substantial amount of playing time. And the result was very positive as these newcomers demonstrated a high level of game awareness and speed on the ball. Even though the team struggled at times to maintain fluidity due to the high frequency of substitutions, we still came home with a 3-1 win, a score that does not fully reflect how we dominated the feeble opposition.

Cistercian started the game at a fast pace, almost immediately pinning All Saints into their own defensive half for the first ten minutes. Early on, Evan Anderson received a well-played pass from Chase Frutos and picked out Zain Dabbous, who was lurking just onside thirty yards up the field, with an arcing pass with the outside of his foot. The center back marking Zain whiffed his attempt at a clearance, and Zain had a clear path to goal. His shot trickled just past the goal keeper, but when Jimmy Garda zoomed through to deliver the final tap-in, the goal was unfortunately ruled offside. Jimmy quickly redeemed himself, however, as just a few minutes later, he flicked a header over the goalkeeper after a scramble for the bouncing ball. After this, Cistercian hit a bit of a wall in terms of scoring, until Coach Walsh strategically moved center back Kyle Blessing to striker roughly ten minutes before half-time. Star midfielder Reefe Harrison put on an absolute clinic when he danced through a string of three or four hapless All Saints defenders and squared the ball to Kyle, who buried the ball with ease. After a few more missed chances, the team went into half-time up 2-0.

Coach Walsh sent out most of the eleven players who had started the game for the second half, and, while they managed to maintain possession for long periods of time, they failed to score until Reefe tapped in a rebound from a powerful shot by Kyle Blessing. While goals were not in abundance and a rotating midfield and defense gave All Saints a few chances to get into the game, there are many positive takeaways from the performance. For one, the new players, in particular Maxwell Vaughn and Jacob Quarles possessed the ball very well and linked up with the other midfielders and forwards with delicate touches and one-twos. In the dying moments of the game, unfortunately, All Saints scored a consolation goal of little consequence. Regardless, Cistercian played well in this first game of the season.

Since then, Varsity has continued to play well against the many teams pitted against the hawks. And since Coach Walsh, desiring to give the team as much experience as possible, scheduled a robust 17 games, the goal of going undefeated is a hefty challenge. Since this first game, Cistercian has tied Kinkaid and beaten teams such as the Highlands, McKinney Christian, Cristo Rey, and the impregnable Nolan. This game was especially important as Cistercian beat the odds purely through hard work, as Kyle Blessing ’20 fought especially hard considering his hamstring injury and sprained ankle. Thus far, Cistercian has retained the title of undefeated, and hopes to continue the streak for the rest of the season. Cistercian opened the year with a strong win, and hopes to dominate the rest of the season retaining the honor of being undefeated.