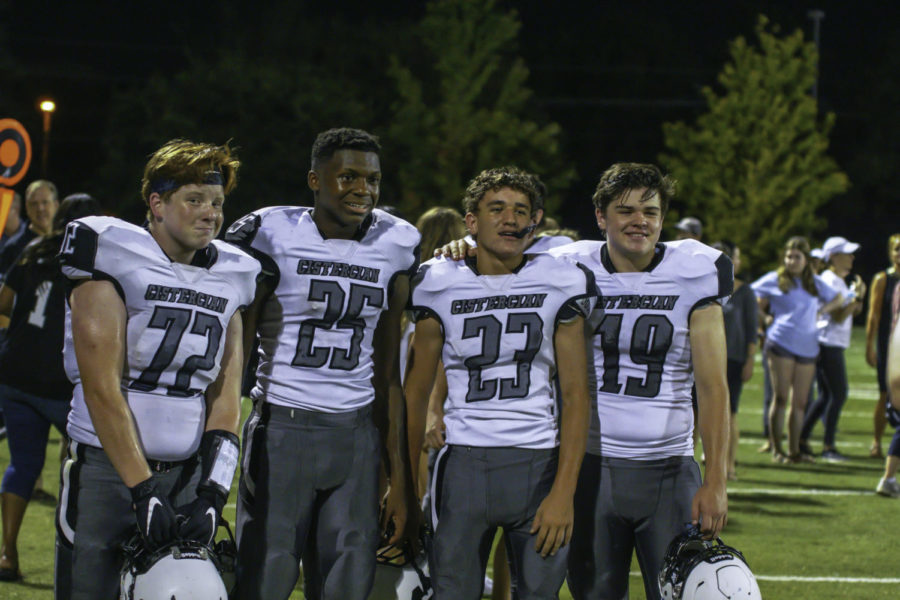 This year the freshman football players began their transition into high school athletics. They have started this year with a lot of potential. Freshman corner back Mac Schneider says that it is strenuous, physically and mentally. He says that the competition is stronger and smarter. However, Mac is happy he gets to play football in Upper School.

Half of the practices are dedicated to offense, the other half to defense. The players are split up into their individual position groups during practice. On offense, Coach Burk works with the quarterbacks, Coach Bruce with the running backs, Coaches Gray and Marin with the linemen, Coach Taylor with the tight ends, and Coaches Manos and Nevitt with the receiver corps. On defense, Coach Burk works with the tackles, Coach Gray with the ends, Coach Taylor with the linebackers, Coach Manos with the corners, and Coach Bruce with the safeties. Aside from the individual position group aspect of practice, the coaches hold team meetings as well. The scout team does a great job challenging the starters during these team run-throughs. Because of the efficiency and rigor of the Cistercian football practice, as well as the program’s collective effort dedicated to winning games, Cistercian is bound for a late season title run.
In the JV team’s first game, they took a crushing loss to the Dallas Christian Chargers. Freshman quarterback/safety Dan O’Toole described his first high school experience as “exuberating,” despite the team’s loss. The team took a commanding lead early on and it looked like another win for the Hawks. Running back Ryan Smith dashed for a seventy yard touchdown run on the game’s first play. As the game progressed, the Chargers began to pull ahead. The Hawks ran out of fuel and ended up losing. Stephen Cox’s conclusion from the game was that the team needed better conditioning in order to compete against teams with more depth.

The JV team played their second game on September 5th against the infamous St. Marks Lions. The Hawks won the game by a crushing score of 50-0. St. Marks being destroyed was largely attributed to Stephen Cox, who scored five touchdowns. They came back from their loss to Dallas Christian and proved their worth. At the varsity game that Friday, freshmen players Dan O’Toole, Cole Burk, Stephen Cox, and Nonso Unini took the trip to St. Marks to stand as swing players. Late in the game, Nonso Unini had a strip sack and Dan O’toole had a tackle.
The Hawks’ momentum carried on to their game against Greenhill, winning 34-18. At the varsity game, freshmen Dan O’Toole, Stephen Cox, Nonso Unini, and Cole Burk suited up for the big game once again. Cistercian would go on to demolish Greenhill. winning 55-0. Cistercian was beating Greenhill so thoroughly that the  coaches decided to give the freshmen a few snaps and a chance to prove themselves. Nonso Unini finished the game with around 30 yards despite his short amount of game time. Greenhill players had to swarm him to bring him down. Nonso definitely proved his ability to run the ball well. The drive was finished off by Stephen Cox who scored a twenty yard touchdown to end the game. Stephen also had around thirty yards at the end of the game. This rushing duo showed that the new freshmen are an undeniably powerful force.

It is clear the freshmen have a lot of talent and potential. Quarterback Dan O’Toole says,“ I have full confidence in my team moving forward and we will not lose another game, and that’s a promise! I am a man of my word!”