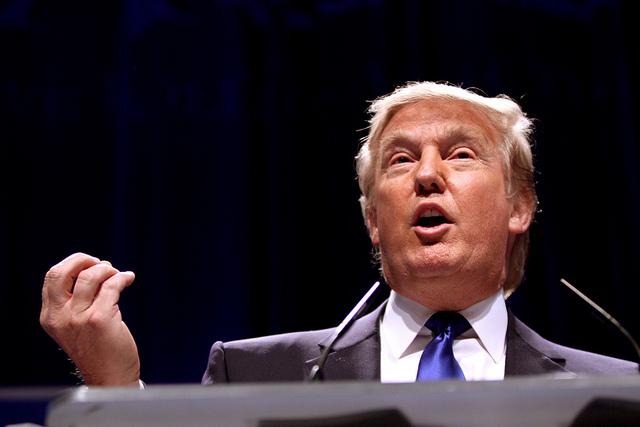 The crowd went quiet as a figure emerged from the darkness. Packing the arena for almost two and a half hours now, the fans erupted in applause as the long-awaited candidate arrived on the stage. Was he a religious figure? A superhero? Some say both.

The man’s name is Donald Trump; his reputation and frequently used name precede him. As he strode down the platform to his podium, taking time to shake hands and greet supporters, the “blonde-haired king” bounced to the beat of Jose Esposito’s “You’re the Best (Around),” from the movie The Karate Kid.

From the very beginning of his rally on Monday September 14th here in Dallas, it was obvious how the businessman-turned-presidential-candidate had drawn such a devoted following. While many, including myself, first considered The Apprentice star’s entrance into the presidential campaign as little more than a joke, it became clear that his run for the White House was no laughing matter. The energy of the crowd — filled with people wearing “Nobama!” and “Reagan-Bush ’84” shirts — slowly built into a frenzy.

Trump opened his rally with two emphatic women, who hyped him up by shouting that Trump was “not a phenomenon, but a revolution” and exclaiming that he “does not apologize for being exceptional.” Trump’s most adamant supporters came out of the woodwork for the rally: some in the crowd attempted to start “USA!” chants, and many others simply cried out short sentiments such as “Send them back!” and “No more politicians!” The air was alive with political idealism, the smell of popcorn, and the sentiment of many rich, white Americans begging for lower taxes, and lower diversity, in this country. While the crowd itself may have lacked a certain quality of multiculturalism, it was easy to get lost in the general feel of the arena.

Although Trump has been known to make outlandish, and even baseless statements, his remarks as a political hopeful at the rally refrained from the crass words with which he has become synonymous. While arguing that he will build a wall that the Mexicans will pay for and stating matter-of-factly that he can keep jobs in America, Trump last Monday set forth a fairly reasonable plan that involves import taxes and newer regulations to the IRS code that would theoretically enforce these ideas. Trump’s primary claim that would cause voters to wince are his derogatory comments pertaining to women, and his frequently exaggerated  claims about his position in the Republican primary polls. While Trump saying that he “surging with women” makes one raise an eyebrow, according to recent surveys by MSNBC and US News, the statement is far and away true. As for his ‘41%’ lead in the polls, while many have put him at 31 or 32 percent, some have assigned a number even higher than a simple majority to his name. Despite the vehement reaction against the Trump, his polling numbers remain undeniably solid.

The only problem with Trump’s plans is the lack of detailed planning that would give evidence supporting their effectiveness and implementability. A plan to abolish the IRS and establish a flat tax, while appealing to many Americans, lacks the possibility to truly sustain governmental economy. Even if the flat tax were a viable option in a country where salaries range from $7.25 to several thousand dollars per hour, the government would still need some sort of internal service to handle the revenue collected by the tax. And while immigrants are here illegally, employment rates have been proven unaffected by their presence, and much of the construction and agriculture industry rely on their presence. Even if this man could build the Great Wall of Trump, achieving his own goals does not practically end with solving this country’s problems.

While to many the Trump rally was a comedy show, and to certain others it was a perfect opportunity for a protest concerning immigration amnesty, and to one man it was an opportunity to wear a large cowboy hat and eat cotton candy on national television, Trump is using all the publicity he gets exactly the way he wants to. The Trump name grows and grows as he remains the most outrageous and outspoken candidate; as he himself stated, ratings are everything, and whether people turn to Trump for the genuine interest, the disgust like that of watching a train wreck occur, or like Stephen Colbert unable to stop himself from eating more Oreos, he certainly has the viewers.

It’s all fun and games in the early stages to watch a man like Donald Trump parade around with his giant personality, but as the primary and national elections come closer, voters need to ask themselves if they are going to continue to watch Trump’s campaign for the enjoyment, or focus on the actual political issues facing the country as we approach 2016. There is no doubt that Trump makes for good TV, but are the American people looking for someone to bounce to the beat of a sports movie theme song, or someone to make an impact in Washington?