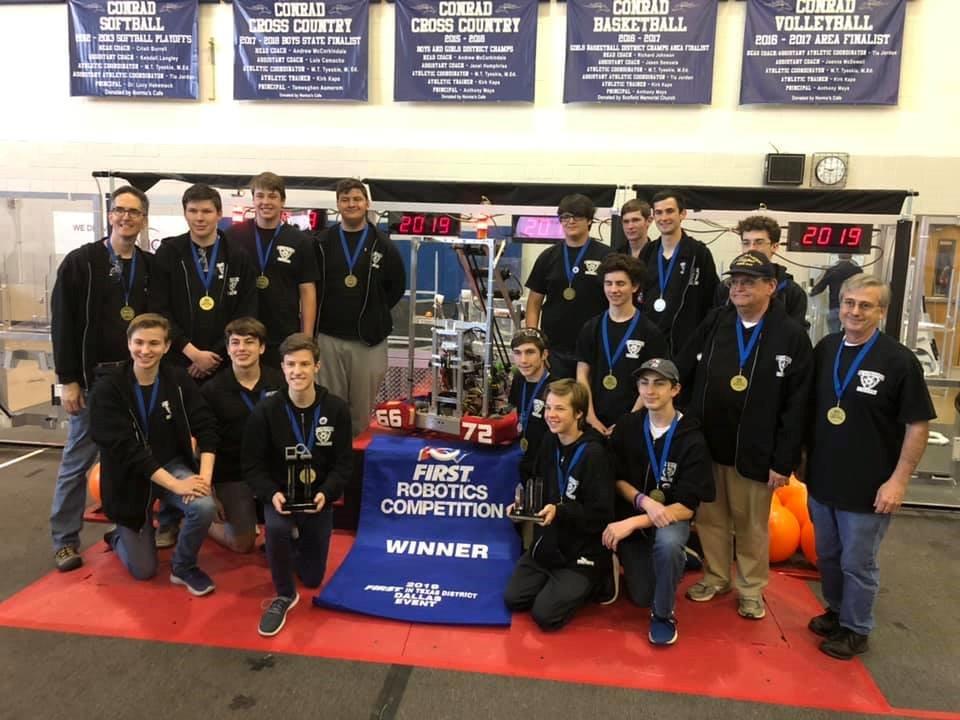 The Sky’s the Limit for Fusion Corps

“We cannot always build the future for our youth, but we can build our youth for the future.” FIRST (For Inspiration and Recognition in Science and Technology) Robotics Competition founder Dean Kamen gave this quote from former President FDR during his World Championship Finals speech. Gathered in Minute Maid ballpark in Houston, nearly thirty-thousand high school students and parents watched the championship matches of this year’s robotics competition. For nearly six-thousand teams, it had been a long, grueling, and fun four months of hard work and competition. Now was time for celebration. As fireworks burst in the night sky over the stadium, students celebrated their successes and learning experiences while also getting to see a sneak peek at the next season. But I could not help but look back at all the challenges team 6672 Fusion Corps faced this year.

On a chilly Saturday in early January, about twenty Cistercian students gathered on the campus of Texas Instruments to witness the 2019 robotics game reveal and begin designing a robot to compete. This year’s theme was “Destination: Deep Space” and the game consisted of robots filling “rockets” and “cargo ships” with giant, orange kickballs and flat, plastic hatch panels. At the beginning of the match, the robot was controlled via remote control by a driver who had to use camera vision to see through a “sandstorm,” which was basically a black curtain placed in front of the driver. Fifteen seconds into the match, the curtain would be removed and the driver would control the robots to place “cargo” and “hatch panels” on the rockets. At the end of the match, the robots had to climb onto a two-foot-tall platform.

And Fusion Corps enthusiastically rose to the challenge! For six long weeks, we developed a bot that could accomplish incredible tasks, such as raising itself onto the platform (which was a programming and engineering feat), under the direction of myself and John Rehagen. For the first time ever, our team utilized pneumatic (high pressure air power) pistons, thanks to the work of Kyle Blessing and AJ Sklar, and electronic encoders, which could tell us the position of each motor. Our newest members built a full practice field which was put to great use in practice before each competition. Finally, we were ready for our first competition in Plano with our bot, HAL (from 2001: A Space Odyssey).

Our driver, Brandon Zimmer, unfortunately, had very little time to practice with the robot. Nonetheless, he excelled with his prowess and skill on the game field. We had a few difficulties at the beginning of the Plano competition. Our battery would run out of voltage during a match and the robot would reset itself before doing anything else. This greatly hindered our abilities, but we worked through the problems and once we found the solution, we never ran into the problem again. In the end, we ranked fourth out of thirty-five teams and captained the fourth-seed alliance to the semifinals where we lost to the number one alliance. Our scouts watched all the matches and recorded the data for each robot, which helped us tremendously in building our alliance of three teams to compete in the playoffs. We did not go home empty handed, as we received the Judge’s Award for our simple, yet efficient and effective design.

At the Dallas competition, we finally got our special climb to work. This set us apart from every other team, and we hit a groove. We ranked first out of thirty-nine teams for most of the tournament until the reigning world champions 148 Robowranglers tied us. They picked us to join the first-seed alliance, and we proceeded to go undefeated to win the title and blue banner, which was recently displayed in Founder’s Hall. We also won the Autonomous Award for our programmer Winston Hartnett’s code which allowed the driver to make the robot climb with the press of a button.

The Texas District Championship in Austin was a deep and intense field with many perennial powerhouses, but we fought our way to being ranked eleventh out of sixty-four teams. We were the captain of the eighth-seed alliance and faced a daunting task in taking on the first-seed alliance in the quarterfinals. With our incredible scouting and our strategic mastermind and business captain Samuel Wilcox, we chose two incredible teams and scared the top alliance. Although we lost, both matches were extremely close and shocked the whole world watching the competition streaming on Twitch.

We gathered district points for each of these competitions and ranked fifteenth out of 195 teams in Texas. This qualified us to attend the World Championship in Houston. 408 teams from China, Israel, Australia, Brazil, Turkey, and the United States battled it out across six divisions. We were in the Turing division. Despite the tough field of teams, we soared into ninth place out of sixty-four teams and led the seventh-seed alliance. Then the unthinkable happened. With his tremendous scoring and defensive capabilities, HAL and our alliance upset the second-seed alliance. Unfortunately, we lost in the semifinals, but at least we did better than Jesuit’s team who lost in the quarterfinals.

And so, Dean Kamen’s words touched all of the students in the stadium – we enjoyed the sport, the friends, and the excitement of getting to play with robots. But we also recognized the invaluable experiences we had received, as well as realized the greater importance of what we were doing. We will be the engineers, researchers, and explorers of tomorrow, and we will all change the world.

If you have any questions about the team or want to join as a high schooler, please come talk to me, Winston Hartnett, Alexander Tsioutsias, Brandon Williamson, AJ Sklar, or Kyle Blessing or Fourth Former Ryan Jackson. We can’t wait to see what next year will bring. Go Fusion Corps!