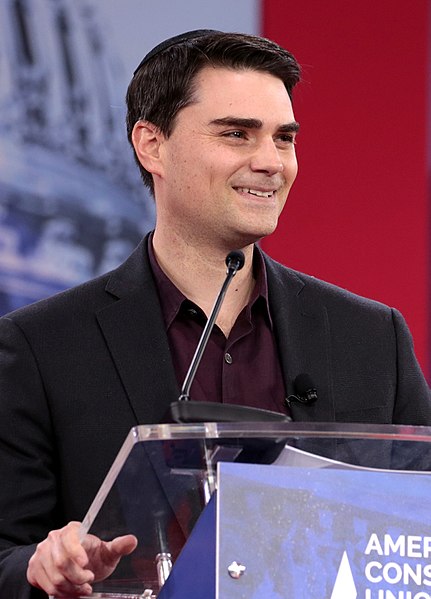 Ben Shapiro holds some problematic opinions, yet he is very popular among Cistercian students. His videos are often presented as paragons of truth and beacons of rationality in a time where political discourse has been reduced to name-calling and pettiness. However, in this regard, I would argue that Shapiro proudly participates in this pettiness. He often insults his opponents personally, and goes out of his way to call transgender people by their birth pronouns for no reason other than to get a reaction, to ‘trigger.’ Shapiro is an entertainer, and a talented one too, but he is neither an academic nor a philosopher. He’s just a radio personality, and like fellow radio personality Stephen A. Smith, he should not actually be taken seriously by anyone about anything.

Ben Shapiro is racist. Time and time again, he has denied any claims that black people are at a significant disadvantage in the United States. He posits that disproportionate poverty, unemployment, and incarceration in black communities are a result not of institutional racism spanning centuries (from slavery to discriminatory housing policies to Jim Crow to the War on Drugs and beyond), but rather of personal choices. According to Ben, African Americans are imprisoned more because they commit more crimes, and they tend to be poorer because they refuse to get a job and rely solely on welfare. The implication here is that there is something inherently wrong with black people, that their woes are the product of intrinsic, genetic faults like lower IQs or something. Shapiro consistently fails to see beyond the surface level of the issues he comments on, either intentionally (because of malice and outright bigotry) or unintentionally (because of incompetence). Either way, he is by no means a credible source of information.

If you feel that I’m reaching, that our intellectual lord and savior Mr. Shapiro is above racism, I’m afraid that the facts don’t care about your feelings. A few years ago, Shapiro infamously tweeted “Israelis like to build. Arabs like to bomb [expletive] and live in open sewage.” In a 2007 article titled “The Radical Evil of the Palestinian Arab Population,” he claims, among other things, that the Palestinian people cheered on 9/11 and use toddlers for suicide bombings. The entire article is pretty disgusting, and it demonstrates nicely how, when it comes to Arab people, Shapiro doesn’t even try to hide his sweeping hatefulness. More recently, he’s expressed support for war with Iran. In this way, even his pro-life stance which many Cistercian students and teachers praise him for is inconsistent.

Ben Shapiro promotes dangerous ideas that manifest themselves in acts of violence. On January 29, 2017, Alexandre Bissonnette shot up a mosque in Quebec City, killing 6 and injuring 19. Bissonnette’s Twitter history revealed that he frequently visited Shapiro’s profile, a profile which contains numerous Islamophobic tweets, one of which I’ve already written out. Here are some more: “Question: WHY is it in America’s interest to have a Palestinian state? They promote terror, murder gays, hate America, and kill Jews.” “Occupy Wall Street is just like the Arab Spring. Both are run by people who don’t shower, hate American capitalism, and despise Israel.*” “So, who’s looking forward to some good old-fashioned Arabs burning things and murdering Joos?” “There will be war tomorrow. Bet your bottom dollar. If UN passes, Arabs will begin murdering Jews. If not, Arabs will begin murdering Jews.” This is the kind of content Bissonnette had been consuming before deciding to actually do something about the perceived threat of Muslims in his community, before turning Shapiro’s words and beliefs into action. Similarly, the Christchurch shooting and the El Paso shooting were the results of radicalization by the online far-right movement, a movement of which Shapiro is a leading member. Shapiro has denounced the shooters, but there’s no denying that a correlation exists.

In conclusion, Ben Shapiro is a caricature, a talking head, but he presents a very serious danger to young people, especially the wealthy, insulated Cistercian community. To members of the faculty, please stop promoting Shapiro as a resource or as a moral teacher. Even with respect to abortion, maybe stick with people less likely to drop impressionable teenagers down a rabbithole of far-right propaganda. To my Cistercian brethren, please make a conscious effort to disavow Shapiro’s brand of hate dressed up as rationality. True intelligence is empathy. And for the love of God, stop trying to get him to be a commencement speaker.

The views expressed in this article are those of the author and not necessarily those of The Cistercian Informer.

3 Responses to “The Shapiro Question”