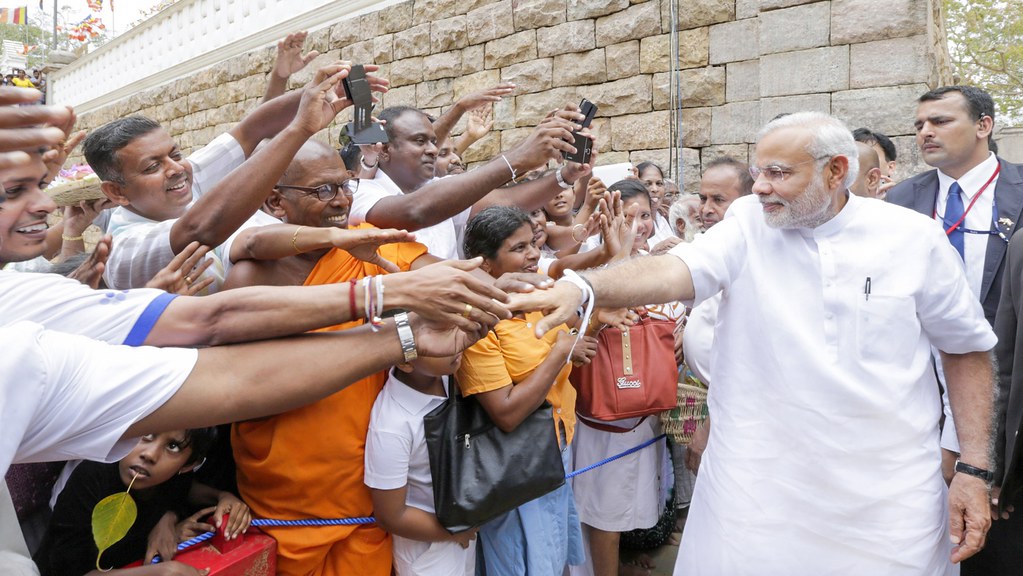 Rise of the BJP

With over a billion people on a tiny subcontinent and a Parliamentary form of government similar to that of Great Britain, India is currently known as the “World’s Largest Democracy.” This large nation has a complicated history, especially concerning the two major religions that reside in this cramped space: Hinduism and Islam. While there are pockets of Christianity and Buddhism in India, the other two faiths really make up most of India’s religious population. Anyone with a basic knowledge of Indian history knows that, in simple words, Hindus and Muslims haven’t gotten along. In fact, they haven’t gotten along so much that a new nation, Pakistan, was formed as a nation for Muslims to live in without fear of Hindu oppression. During the diaspora of Hindus fleeing the newly formed Pakistan and Muslims fleeing Hindustan (India), millions were killed in scuffles along the way. This is just a singular example of the hundreds of thousands of Hindu-Muslim incidents that characterize the animosity between the two beliefs.

It’s no wonder that in these conditions, organizations like the RSS are able to form. The RSS, the Rashtriya Swayamsevak Sangh, is a right-wing, paramilitary, Hindu organization that was formed in the 1920s. This organization was formed to unite Hindus in their faith and as a people, although it quickly (and predictably) devolved into nationalism in the 1940s, leading to a prominent leader of the organization praising Hitler about his race purity ideas. It should also be noted that Nathuram Godse, the man that assassinated Mahatma Gandhi, was a member of the RSS. The BJP, the Bharatiya Janata Party, is the political arm of this Hindu volunteer organization. When translated, the BJP name loosely means “The Indian Populist Party” or “The Indian Common Man’s Party.” The current leader of the party, Narendra Modi, wowed audiences in India and across the world by becoming one of the first leaders in India to inspire such voting turnout that his party alone was able to win 283 seats out of 545 in the Lower House of Parliament, the Lok Sabha. The Lok Sabha functions like our House of Representatives, with direct election by the people. The Rajya Sabha, the Upper House of India’s Parliament, functions like our Senate used to in the 1800s. Representatives are chosen by the Indian equivalent of governors and state legislatures. In 2019, although he lost seats in the Rajya Sabha, Modi’s BJP gained seats in the Lok Sabha, winning 303 seats out of 545. In fact, the leader of the opposing Indian Congress Party, Rahul Gandhi, was voted out by his own district and replaced with Smriti Irani, a member of the BJP. In a strange occurrence, though he lost states overall, Modi’s power actually waxed instead of waning like the world predicted it would. It is with this newfound power that Modi’s and the BJP’s policies and history have come under even greater scrutiny to the rest of the world.

At the moment, the BJP revolves around Narendra Modi. His rise to prominence combined with his nationalistic rhetoric has allowed the BJP to flourish as much as it has. And, quite frankly, it’s almost understandable. Modi is a classic rags-to-riches story, rising out of poverty to become governor of the state of Gujarat and then skyrocketing to prominence to take the seat of Prime Minister of India. He marketed himself as a devout Hindu by going on long meditation journeys in the Himalayas, and his nationalistic rhetoric set the hearts of Indians across the nation ablaze. Combined with his Islamophobic sentiments in a country where Muslims are already the persecuted minority, it’s no surprise that Modi was able to win in the way he did. Rather than attempt to protect the rights of the minority, Modi doubled down against Muslims in his administration. After his 2019 reelection which gave him even more power than he wielded before, Modi used Parliament to revoke an extremely controversial part of the Indian Constitution, Article 370. This article gave special autonomy to Jammu and Kashmir, two disputed territories between India and Pakistan. Because of their mixed Hindu and Muslim population, it gave them the right to choose what kind of laws to draft and follow. However, after his revocation of these territories’ autonomy in August, Modi marched Indian troops into Kashmir and blocked all communications from this area. It took until the beginning of February for the Indian courts to rule that the Indian government’s rationale for doing so (that it was necessary to keep the peace) was not a legitimate reason. Of course, the courts didn’t rule to give the region Internet access immediately (even though one of the judges claimed Internet access was a fundamental right). They merely demanded that Modi give more notice before blocking out the Internet and gave the government a week to revise its policy. Of course, this meant that Kashmir currently has the lowest speed Internet possible, barely any cell service, and there are only 301 sites that these residents are allowed to access, all of which are controlled by the Indian government. It should also be noted that military personnel stationed at the borders means Kashmir residents are unable to leave or flee. They are essentially being held prisoner.

In a more widely known incident after Kashmir, Modi and his Parliament also instituted the Citizenship Amendment Act, which gives many undocumented immigrants a path to citizenship, except Muslims. He has made sure that anyone that is not a citizen and is still undocumented gets sent to detention camps, which means that hundreds of thousands of Muslim refugees will be shipped off to camps because of this new law. And of course, if citizens are unable to definitely prove their citizenship status, they are shipped off to those detention camps.

These terrifying incidents have called into question Modi’s legitimacy as Prime Minister and, quite frankly, these concerns barely scratch the surface of the BJP’s atrocities. All of these incidents are from a few months ago and they are only the most recent attempts to turn India back into a Hindu, gods-fearing state from a secular one. This is the BJP at its zenith and unless the other parties can form an efficient coalition and win back the illiterate, uneducated voters that Modi has wooed over with his rhetoric of Indian greatness, the fears of a new Nazi-style regime that lay in the back of every Indian Muslim’s mind may come to fruition sooner than anyone thinks.