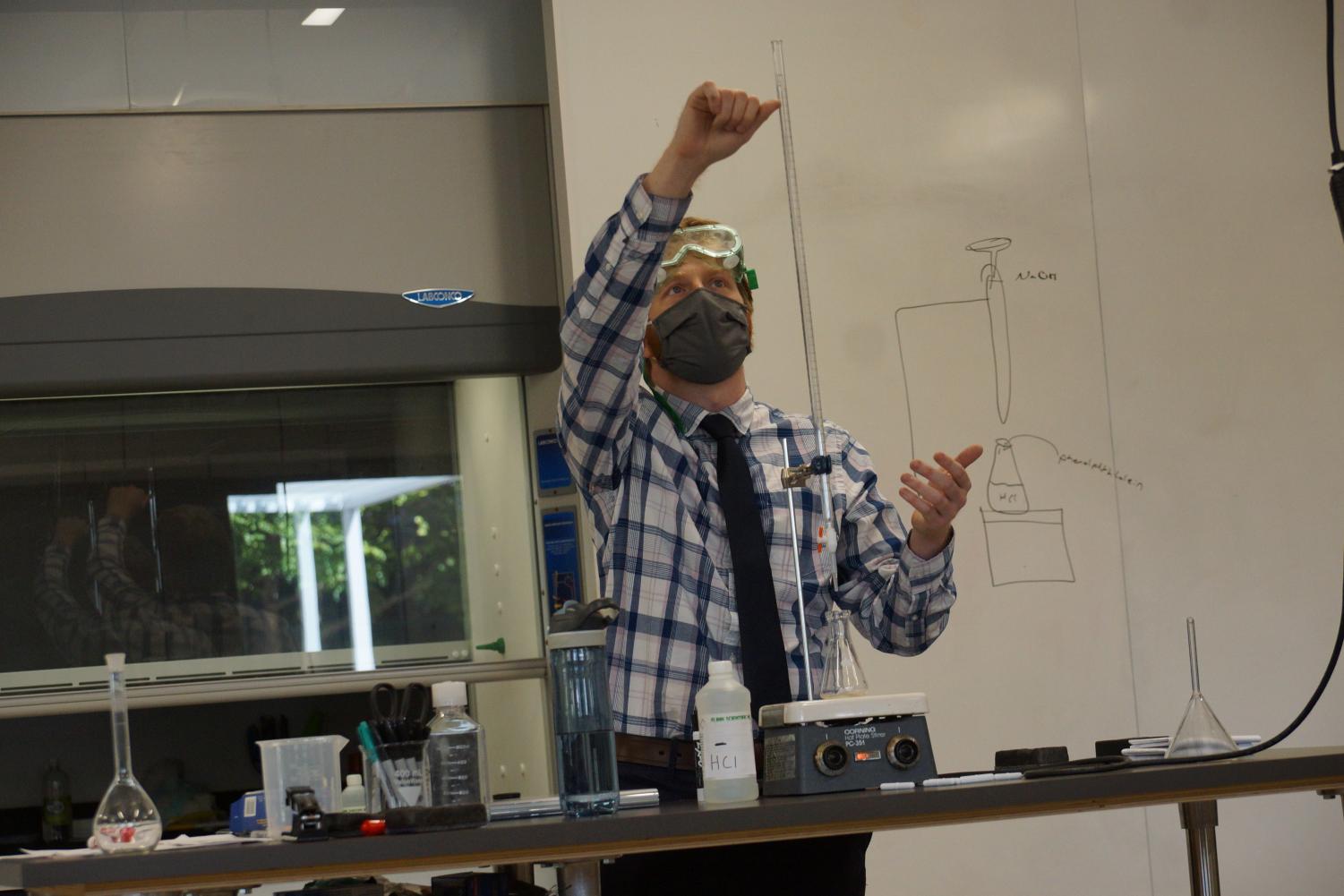 This year, two new science teachers joined Cistercian. One of them is Mr. West, who teaches junior and senior chemistry. The Informer caught up with him to learn a little bit about one of the newest members of the Hawks’ nest.

How did you find your way to Cistercian?

So, this is actually kind of funny. In grad school, I was working for a Dr. Kroll who turns out to be the husband of Dr. Kroll here. And it was just about when the pandemic hit and everything kind of changed. We went to online school; we had a couple of weeks there where we didn’t really know what we were doing. Around that time, I got an email from Dr. Kroll letting me know of a couple of openings at private schools in the area, this being one of them, and I had heard of Cistercian before because he had mentioned to us that, ‘Oh, yes. My wife is head of science at an all boys’ private school out in Irving.’ And seeing that, I thought, let me go ahead and put my name in for this year because I’ve always loved teaching more than research when it came to grad school, per se. And after that, a few interviews and I got the call from Father Paul saying, “Hey, welcome aboard. We’d love to have you.” Pretty happy to be here, I must say.

How does your experience in graduate school inform the style of your teaching?

So, and it goes to a little bit earlier than grad school as well, because in grad school I was a TA, mostly for Gen Chem at first and then later for P Chem, but I was constantly in the position of ‘I’ve got these students who I relate a lot to having just been in their position, and they need to understand these concepts to get the grade, get the credit, and move on.’ And so, my task was always to not just administer the labs, but do my best using just a board and a marker to help them understand whatever it was in their lecture that perhaps they were missing that was stifling their ability to succeed in lab or even in the lecture itself.

But all this goes back to even further, when I was an undergrad. I, all the way back to Gen Chem, I was constantly helping students around me understand the concepts that we had covered in lecture. So, it wasn’t really something I set out to do, it was something that kind of formed around me, I guess. Study groups just started to form. They were always asking me to, “Hey, would you come in and work some problems with us?” And it would end up being me with a group of five or six and I’m working on a little pocket whiteboard or some such. Here’s how you work this problem. Here’s the basic concept involved. So, in a way, I’ve kind of been training for this for it’s about seven years now. So, it’s about that.

I have a grasp of this concept and you all would like to, so let me see if I can find a way to make this make sense.”

A lot of what I do in lecture is really that same style of ‘I have a grasp of this concept and you all would like to, so let me see if I can find a way to make this make sense.’ And this has helped me refine methods, ways of presenting concepts that people tend to get more than others. It’s helped me weed out bad teaching that I received, that left a lot of people confused. So, we would get something in lecture that would leave people behind, so to speak. And then we’d be in the study group afterwards. They’re like, “What was this about?” And in trying to work out how to best present it to them, I was working out more optimal ways to give people the concepts such that they can be understood because I really think chemistry doesn’t have to be complex, but a lot of the way it’s taught makes it needlessly so.

And a lot of what I’m finding, the way things were taught, […] now that I’m on the other side trying to teach chemistry, I see why it was presented to me in the ways that it was when it perhaps wasn’t so effective because it’s sort of tradition. It’s how all the textbooks are laid out. They always want to present concepts in a certain sequence or under a certain framing, and I think a lot of ideas in chemical education that have persisted are not necessarily the best ideas in terms of engagement, but, more importantly, comprehension. So, I don’t know, I guess just through all this experience I’ve managed to find a pretty good balance between being technical enough for the material to matter, but understandable enough and relatable to the real world enough that people can understand it, whether or not they have any particular interest in chemistry.

What drew you to chemistry itself?

I guess I was always good at it in school. And to me, there was just something very neat about the idea that from these very basic pieces, from elements, all the elements you find on a periodic table, we get biological life forms, we get all sorts of minerals and organic compounds we find in the earth that all have such wildly different properties. And then I started to learn a little bit more about organic chemistry, particularly medicines and how we go through this process of building a scaffold of carbon atoms with other things on top of them, and they have these massive physiological or psychological changes when administered in human beings. I just found the whole thing really fascinating.

And physics is neat too because it’s even more fundamental to me. It’s like going even simpler and seeing the beauty and complexity that can emerge from much more fundamental particles. Like at the very bottom, when you start looking into what they call the standard model of particle physics, we start to find that all reality, as we can perceive it anyway, is only composed of some 13, 14 different particles that can be plugged into specific classes. And it’s merely the arrangement and combination that gives rise to all the complexity we see at the level of our own life or the level of galaxies and stars and whatnot.

So, I guess it’s really just that. Seeing all this chaos emerge from order and the order that forms from that chaos was very interesting to me. And then I stuck with it just really for an aptitude. It came down to it, I was going to college. I had to pick something and [if I had chosen] a music degree, as much as I would have loved to do it, my parents wouldn’t have been happy with that. They said, “How are you going to make money with that?” Yeah. I’m not that good.

What instrument did you play if you played an instrument?

Guitar. Still play it to this day. It’s fun. I think there’s a lot of value in having hobbies like that, that are not only creative, but also push you in some kind of technical way.

And then one thing I’ve heard is that you’ve described yourself as a gamer in class.

Yeah. I haven’t described myself as that. My other seniors have assigned that label to me.

I suppose it’s not wrong. I do play video [games].

Do you have any favorite franchises or individual games?

So, I would say favorite individual game’s… shoot, so in terms of stuff that I actually play regularly, I’ve always been really big into fighting games. I have to say my favorite out of all of those is one called Street Fighter III: 3rd Strike from 1999. It’s really old, but generally, [I play] fighting games, Street Fighter, Tekken. I’m trying to remember what else I really play, more obscure stuff. But if we’re talking best of all time, that’s a different question.

We’ll leave it up to the readers to find this answer.

This interview was edited for length and clarity.